Netflix currently creates categories comprised of television and movies based on what its user likes and watching habits. The streaming service lets users have the option to add shows to "My List," a category where content is stored for them to watch later. What if we could add more functionality to the "Lists" feature giving the user more options to curate their Movie/TV show recommendations?

Working within a four-person team, we developed a way for the user to create multiple lists to organize and store content that makes sense for the user. We also created a way for a user to share a list with another user to add to their account.

Getting to know current users

"I don't like Netflix's organization pattern. I often spend 30 minutes before I'm able to find a show I want to watch?"

"Netflix is overwhelming. There is too much stuff, and I don't know where to begin."

"I get a lot of movie recommendations from friends, but I'm too disorganized and I forget them."

Once we conducted all of the interviews, we organized the content during an Affinity Mapping session. 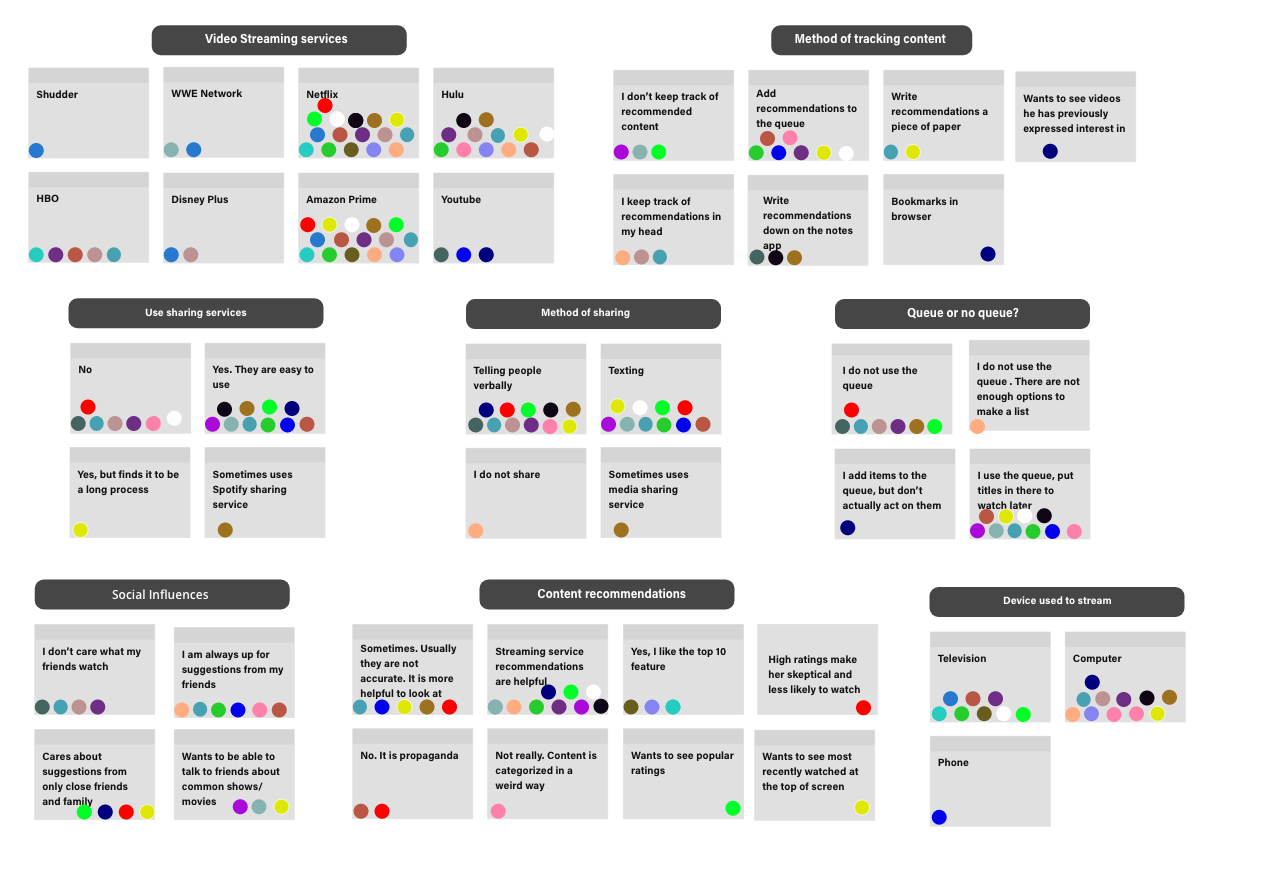 In conjunction with the surveys and interviews, we conducted competitive and comparative analysis. We wanted to compare Netflix to other popular video streaming services and platforms. The main goal was to gather insight into the conventions and flows that exist, allowing users to save content to watch later, commonly known as a "List" or "Queue." We discovered that most services had a similar approach to users "Lists" but had basic or nonexistent sharing and editing capabilities.

After synthesizing all of our research, we would interpret all of the data into two user personas to represent how different users might interact with the website based on their goals. 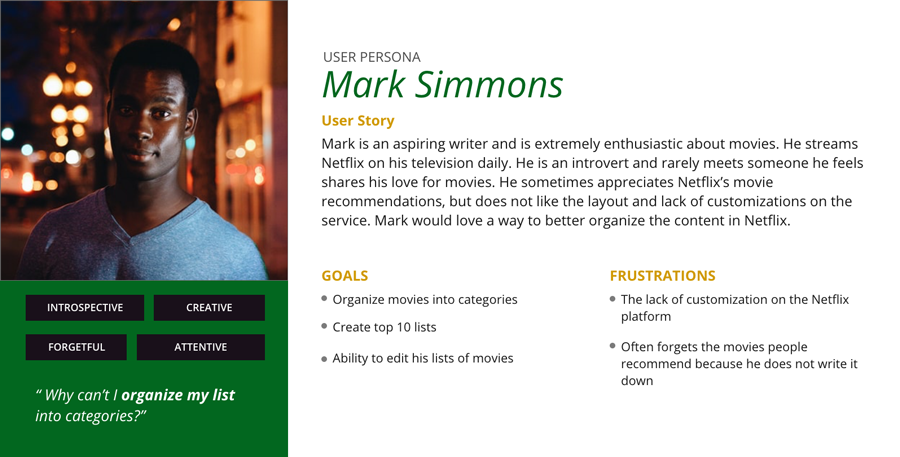 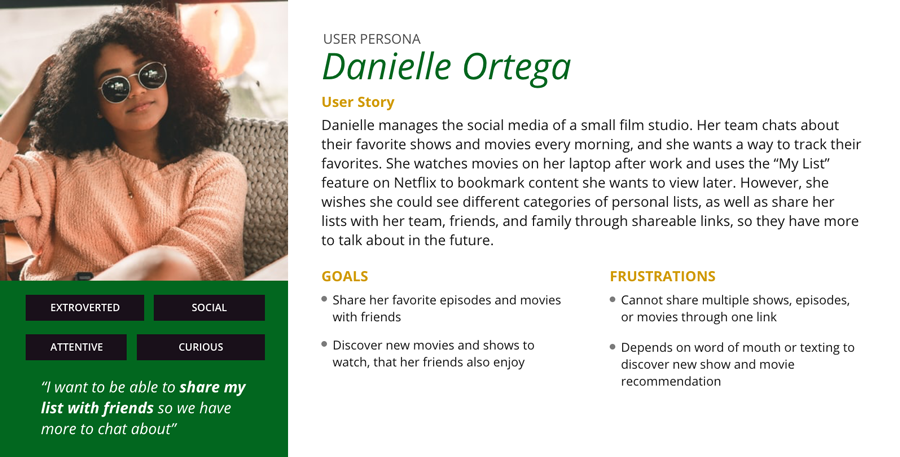 Netflix needs a more efficient and effective way for Netflix users to manage the 'My list' feature to better organize and share movies and tv show recommendations.

By designing Netflix’s My Lists feature to incorporate creating and editing capabilities, we will enhance the experience of organizing and sharing video content on Netflix's platform.

Our team decided on three key features that would address the needs and goals of the user personas:

Receive and Save Lists
Users have the option to save lists that have been shared with them. Each list is labeled with the creator's name.

In its current state, Netflix allows users to add content to only one List. By doing so, the user creates clutter and makes their List disorganized. By developing a way for users to organize their content, we would be removing a crucial pain point in their Netflix streaming experience.

With the idea for the features solidified, we thought about how the typical user would access it. We didn't want to create anything drastically different from what was already present in the Netflix UI that users were accustomed to. The team decided that changing the tab's language for the tab on the main navigation bar from 'My List' to 'My Lists,' highlighting that users could access their own and their friend's lists on this page.

After synthesizing the research we began working through visuals through sketches. We focused the sketches on screens that were directly related to the tasks that we wanted the user to go through, highlighting the new feature we wanted to implement. These sketches demonstrate our initial ideas about how to implement the create a list feature and sharing a list. 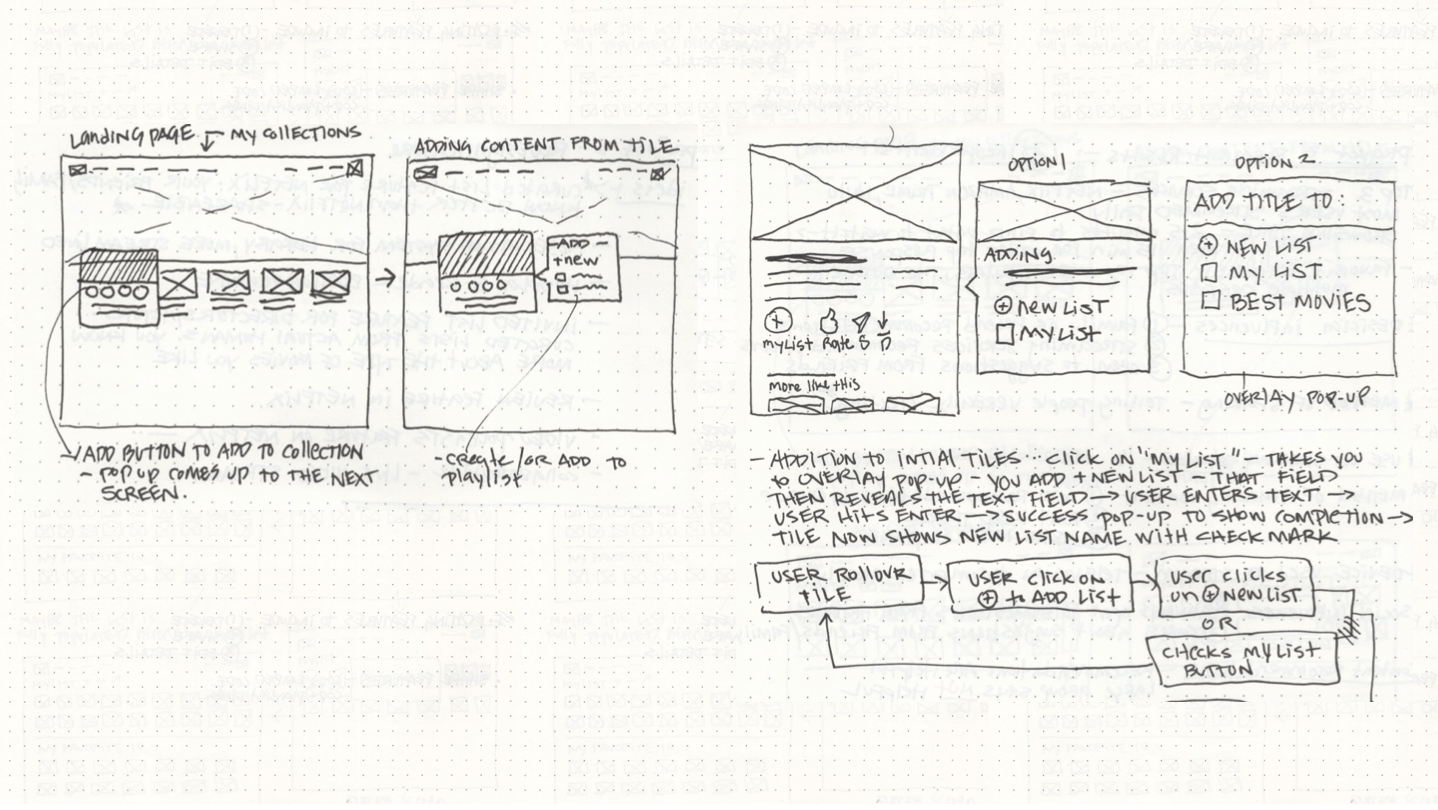 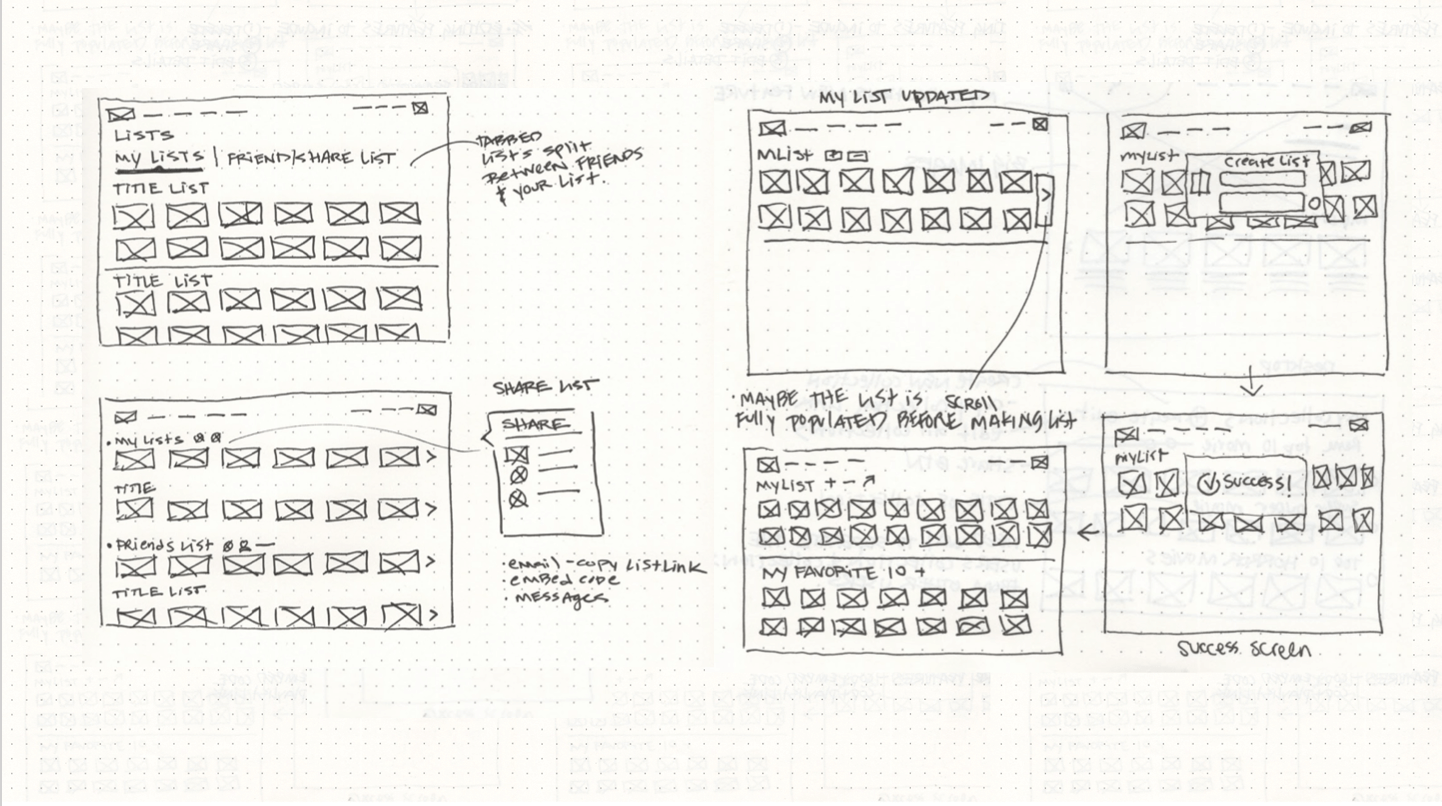 Our goal for the first prototype was to A/B test methods of separating personal and friend-shared lists. After our user tests, we discovered that our users preferred both lists stay within the same page, so for the next iteration we would develop the UI to accommodate a single-page design.

Option A: 'My list' page with two separate tabs at the top of the page.

Option B: 'My List' page with Users preferred a single page design.

Iterations made for next round

On our second prototype, users were able to test the feature more quickly. However, we noticed some of our users gravitated towards the search bar as their first task, which we had not built out. We also discovered most users did not think adding a description to each list was necessary, so we removed that feature. 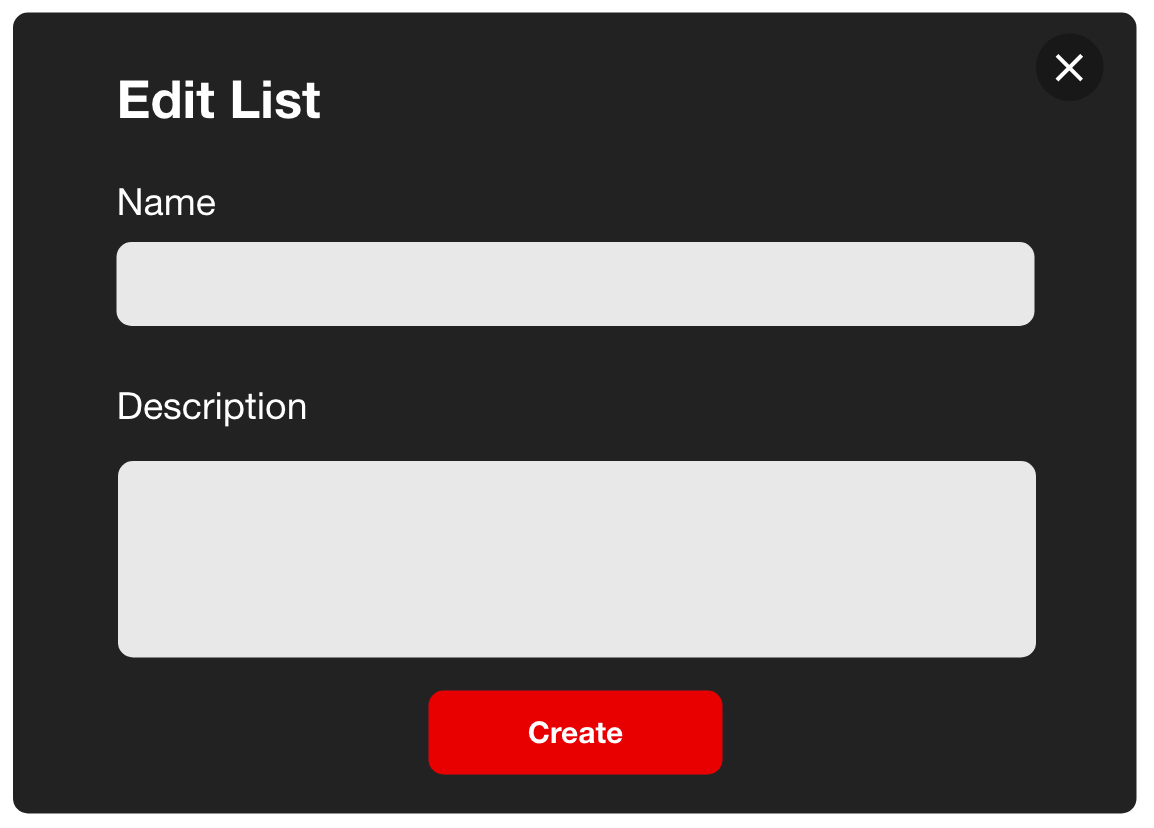 Iterations made for final draft

For our final prototype, we built out the search feature further, added color to indicate visual cues within action icons, and further developed the link-sharing feature through text message.

Creating a New List
Users now have the ability to add titles to multiple lists. List names can be customized.

Receiving a List
Users can receive lists from friends. Netflix will save those lists under the "Friends List" tab.

Below is a walkthrough going through our users' tasks they completed during testing.

Most of our users we interviewed use a computer to stream Netflix but streaming on tv and mobile devices is also very common. Our current solutions would translate well within the web application, such as Apple TV and the mobile version.

If these solutions were implemented, we could expand our feature within the search page to search playlists from other Netflix users. This would allow a user to search for friends' lists or public figures' lists they would be curious to watch.

Check out the Desktop Prototype in its current state

After some feedback from users, they wanted to see how the mobile version would flow. I went ahead and created the prototype on the right to help users visualize it. Currently, the Netflix app's mobile version has a share feature, so I wanted to stay in line with their process while incorporating the other editing features we developed.

WANT TO WORK TOGETHER? LET'S CHAT!